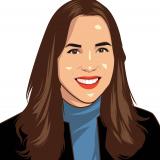 Chief Design Officer USAA
As the Chief Design Officer of USAA, Meriah Garrett seeks to create an environment where beautiful member experiences are the norm. This means leading the internal design organization, growing design capabilities, and defining a curriculum of internal education that lifts up design practitioners and helps encourage design thinking across the business. Prior to joining USAA, Meriah spent more than 8 years at the design firm frog. As a Creative Director, she led multi-dispensary teams in delivering innovative designs that engaged consumers and created stronger brand relationships. Meriah was responsible for directing all phases of creative work from research and concept development through production, as well as creating a studio environment that drove impeccable design. Meriah began her career as a freelance designer and developer in the emerging web space during the mid 90’s. She later moved to Austin for the growing tech industry, where she worked on an early web-based tablet computer for seniors, and later, enterprise security and IT portfolio management. She joined frog in 2007 where she worked on questions for Disney, Google, Michael & Susan Dell Foundation, Capital One, S&P, EY, LG, Sprint, AT&T, Bell Mobility, Vodafone, 7-Eleven, Kohl’s, Whole Foods and more.
We use cookies and similar technologies to recognize your visits and preferences, as well as to measure the effectiveness of campaigns and analyze traffic.
To learn more about cookies, including how to disable them, view our Cookie Policy