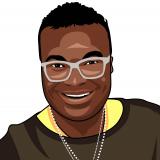 Senior Design Director Nike
Wilson W. Smith III is a Senior Designer and Nike DNA Design Specialist. During his 33-year tenure at Nike, Smith worked on projects that run the gamut of the design profession—retail, graphics, architecture, footwear, experience and apparel—and designed and developed product for some of the greatest athletes in Nike’s history, including Michael Jordan, Serena Williams, Andre’ Agassi, Roger Federer. In addition, Wilson is a Professor in Product Design at U of O, where his studio focus is Adaptive Design Enabling Para Athletic Performance. He also co-teaches Intro to Product Design in the UO Sports Product Management graduate program. Graduating in 1980 with an architectural degree from U of O, Wilson initially worked for Skidmore, Owings and Merrill out of Portland. He began his Nike career in 1983, assisting in Corporate Architecture. Transitioning into footwear design his focus became athlete inspired products in Tennis, Basketball, Cross Training, and Brand Jordan, where he designed Air Jordan XVI & XVII. Black Enterprise Magazine named Wilson one of America’s Top Black Designers. What truly defines Wilson is his incredible passion around coaching, teaching and giving back. Wilson’s commitment to the next generation of designers and the power of design to positively impact the world has created a presence and legacy that expands beyond his designs at Nike. He is also a worship leader at SouthLake Church, Lake Oswego, Oregon.

Check out the incredible speaker line-up to see who will be joining Wilson.

Download The Latest Agenda
We use cookies and similar technologies to recognize your visits and preferences, as well as to measure the effectiveness of campaigns and analyze traffic.
To learn more about cookies, including how to disable them, view our Cookie Policy